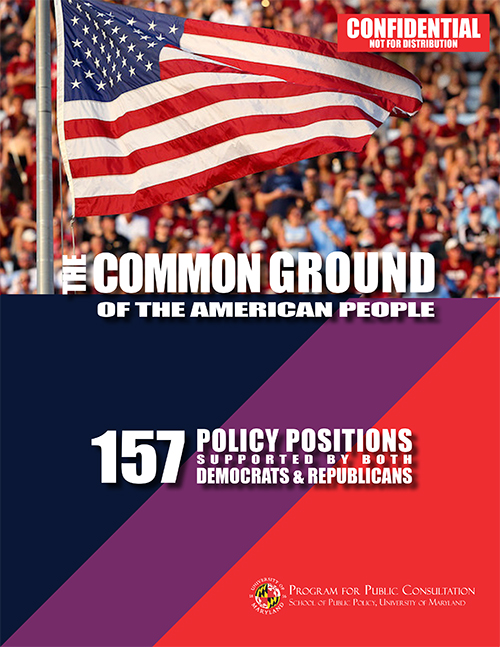 Over a five year period, 31 in-depth surveys were conducted with 85,921 survey respondents (though some individuals were respondents in more than one survey). Most of the policy positions considered were based on proposed legislation. Others were derived from proposals made by the president, or were items in budget proposals.

The surveys were not simply standard polls used by the media or in political polling. For many issues, average Americans have a lack of information and in some cases misinformation on key issues. They also have not heard key arguments on each side of the issues. Research shows that in these circumstances poll responses are not highly stable and subject to even minor variations in the wording of the questions. Thus, they are not a reliable source of direction for policymakers.

Therefore for this project a unique survey form—developed by the Program for Public Consultation at the University of Maryland—that goes well beyond standard polls. The aim of the process is to put respondents in the shoes of a  policymaker; thus they are called policymaking simulations. In this process, respondents are:

The following surveys are referenced in The Common Ground of the American Peoople: 157 Policy Positions Supported by Both Democrats and Republicans.  Access the links below to download the full survey reports, questionnaires with frequencies and/or policymaking simulations for each survey.

AMERICA IN ONE ROOM (A1R)