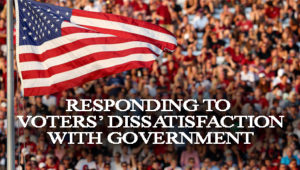 Looking toward 2020, a major new study finds voters are seeking candidates who they believe will be more responsive to the people. Their dissatisfaction with elected officials in Washington, DC is fueled by the pervasive perception that they give a higher priority to special interests, partisan interests, and wealthy campaign donors.

Nine-in-ten endorse a new means–called a ‘Citizen Cabinet’–for officials to systematically consult their constituents on key decisions.  Most say they would even cross party lines to vote for a candidate who would support having such a Citizen Cabinet.

The study was conducted over the last two years, with a series of five surveys administered to 16,525 registered voters, by the Program for Public Consultation (PPC) at the University of Maryland, in conjunction with the nonpartisan organizations Voice of the People and Common Ground Solutions. The study was released today at an event at the Brookings Institution.

“In both 2016 and 2018 outsider candidates like Donald Trump, Bernie Sanders, and Alexandra Ocasio-Cortez were buoyed by their claim that they would listen to the people over special interests and their parties,” said PPC Director Steven Kull. “Voters may well be looking for candidates with that message in the 2020 election as well.”

Historically high numbers (89 percent) say the government “is run for a few big interests” rather than “the benefit of all the people.” Nine-in-ten say that “members of Congress think mostly about their party, not about what is good for the country.”

Overwhelming majorities responded favorably to a new method for citizens to give input to members of Congress called a ‘Citizen Cabinet.’ The Citizen Cabinet is a large representative sample of constituents from a specific district, state or the nation as a whole who go through an online process called a ‘policymaking simulation’ that is reviewed in advance by experts and advocates across the spectrum of views to ensure accuracy and balance. Constituents:

Nine-in-ten voters approve of the Citizen Cabinet idea. Two-thirds think that a Citizen Cabinet would likely increase the responsiveness by a member of Congress to the views of the people.

Importantly for the 2020 elections, when Democratic and Republican respondents were presented a candidate from the opposing party endorsing having a Citizen Cabinet, large majorities from each party nonetheless expressed a  positive view of the opposing party candidate.  Presented a hard-hitting debate for and against the idea of a Citizen Cabinet, large majorities said they would cross party lines to vote for the candidate who favored it.

An overwhelming 88 percent say that Congress would be more likely to find common ground if the public’s views had more influence on policymakers.

A major pilot study with Citizen Cabinets suggests they are right. The report summarized the findings of a major pilot study with a national Citizen Cabinet, as well as in nine states and in two Congressional districts.  Bipartisan majorities agreed on dozens of solutions to national policy challenges on a wide variety of topics including immigration, the federal budget, Social Security, Medicare, federal poverty programs, energy and the environment, government reform, criminal justice, the U.S. Postal Service, and more.

“Frustrated voters, and voters who feel disconnected from government, won’t be satisfied with new slogans,” said Howard Konar, founder of Common Ground Solutions. “They are more interested in answers and results. They want clear signs that their elected officials are actually listening to them and working on common sense solutions.”

The five surveys for this study were conducted online over the last two years with a total of 16,525 registered voters provided by Nielsen Scarborough from Nielsen Scarborough’s panel of respondents, who were recruited by mail and telephone using a random sample of households. The margin of error varied from +/-1.8 to +/-2.2% for questions that were asked to the full sample. For questions that went to partial samples, the margin of error was as high as +/- 4.5%.