Based on “Tax Reform That Will Make America Great Again,” a document issued by the Trump campaign in September 2016, the administration will seek to reduce income taxes, corporate taxes, taxes on capital gains and dividends, the estate tax, and taxes on pass-through entities. None of these reductions are favored by a majority of the public or even a majority of Republicans. The only Trump proposal to get majority support is for increasing taxes for carried interest.

In the survey, conducted by the University of Maryland’s Program for Public Consultation, a representative sample of voters were given the opportunity to set revenue levels. Majorities increase income taxes for higher earners, corporations, and capital gains and dividends, while opposing reductions in the estate tax, or taxes on owners of pass-through-entities (e.g. partnerships). Overall the majority increase revenues by $112.2 billion per year. While Democrats increase revenues a bit more (118.5 billion), Republicans raise them somewhat less at $36.2 billion.

“The American public appears to be far more concerned about the deficit than the President,” said PPC Director Steven Kull.

The one area where the public was in line with the Trump proposals was for increasing the tax on hedge fund managers, by taxing carried interest like ordinary income.

The survey took a representative sample of 1,800 registered voters through a process in which they were given the opportunity to make changes to existing taxes and to consider new tax proposals. As they went along they received input about the impact of their choices on the deficit, though they were not prompted to reduce the deficit. This is part of a larger study in which they were also given the opportunity to make changes to spending. The Trump proposals call for reducing the top tax marginal tax bracket from 39.3 to 33 percent, repealing the Alternative Minimum Tax, and repealing numerous deductions. All income brackets would get some reduction, but just over three quarters of this reduction would g

o to the top twenty percent of taxpayers who would see their average tax rate reduced by 4.9 percent. The Tax Foundation, using dynamic scoring, projects that the resulting loss of Federal revenue will average at least $105.8 billion per year.

For the public, the majority do not reduce the taxes of any income group. But they do make tax increases for higher earners income. Starting with a slight majority raising taxes on incomes starting at $100,000 (the top 22 percent of earners) by 5 percent, with larger percentages proposing 5 percent increases at higher income levels. At the million- dollar income level, 52 percent are ready to raise taxes by 10 percent. Majorities raised revenues a total of $63.3 billion. Capital Gains and Dividends
Trump has proposed taxing capital gains and dividends at a rate that is half the rate of ordinary salary and wages, with a maximum rate of 16.5 percent. For most taxpayers this would constitute a tax cut and result in a reduction of revenues of $51 billion. But only 15 percent of respondents endorse this idea, (Republicans 21 percent, Democrats 10 percent).  On the contrary, 63 percent favor raising the tax rate from 23.8 to 28 percent for high-income earners (individuals with incomes of $430,000, couples at $500,000), increasing revenues by $22 billion (but just 49 percent of Republicans endorsed this position). Corporate Taxes
Trump has called for a reduction of the top marginal corporate tax rate from 35 percent to 15 percent, repeal of the corporate Alternative Minimum Tax, and repeal of certain deductions, resulting in average annual reductions of $195.8 billion in revenue according to the Tax Foundation. Estate Tax
The Trump proposals call for eliminating the estate tax, which would reduce revenues by an average of $20 billion over the next 10 years. Just 22 percent of respondents, including 36 percent of Republicans favor this option. Rather, a slight majority of 51 percent favor raising the estate tax from the current 40 percent at least to 45 percent, increasing revenues by $7.8 billion (Democrats 65 percent, Republicans 37 percent). 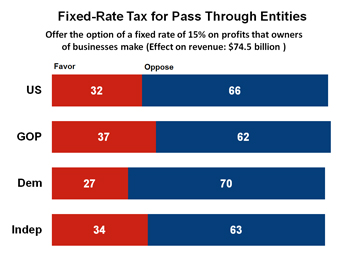 The Trump proposals specify making it possible for owners of pass- through-entities like sole proprietorships, partnerships, and S Corporations (which do not pay taxes on income) to not have their profits taxed like ordinary income as it is now, but rather to pay a maximum rate of 15 percent. This would result in a revenue reduction of $74.5 billion for 2018. This idea is rejected by large majorities, overall (66 percent) and among both parties (Republicans 62 percent, Democrats 70 percent). The one area where the public and the administration are in line is on requiring that managers of private investment funds, such as hedge fund managers, have their income taxed like ordinary income rather than as capital gains, which would increase revenues by $2.1 billion. This idea produces overwhelming consensus with 78 percent approving of it, including 75 percent of Republicans and 81 percent of Democrats.

The survey was fielded March 8-16 with a national probability-based sample of 1,817 registered voters, provided by Nielsen Scarborough from its sample of respondents, recruited by mail and telephone using a random sample of households. The margin of error was +/-2.3 percent.

The full report, which includes responses to spending items and other revenue options, will be forthcoming in the next weeks.

A full chart of these spending recommendations with party breakdowns can be seen at: http://vop.org/wp-content/uploads/2017/03/Comparing_Revenues.pdf

The questionnaire can be seen at: http://vop.org/wp-content/uploads/2017/03/Budget_Quaire_Revenues.pdf